When it comes to inspiration, it’s often success stories that garner the most attention.

But a comment made by a local entrepreneur generated interest in an event that would highlight just the opposite—failure.

“The idea for Failure Fest originally came from Josh Sopko,” said Startup Sioux Falls founder, Matt Paulson. “He made the offhand comment, ‘What if we did something like 1 Million Cups, but told the stories of businesses that failed?’ I liked the idea, and the Startup Sioux Falls team ran with it to make it a reality.”

Sharing stories of trials and triumphs

Both Brown and Hatch have experienced challenges and, ultimately, failures in previous business ventures. The goal of sharing these stories was to highlight the reality of failure and to encourage entrepreneurs to persist and hone their ideas.

“Startup events almost always feature entrepreneurs that have been successful, but the reality is that many small businesses fail,” Paulson said. “That doesn’t mean the entrepreneur is a failure, it just means their first idea didn’t work.”

Brown spoke first, telling the story of The Bakery, a co-working space he co-founded in 2015. After a series of setbacks and unexpected challenges, he had to close its doors in 2017. 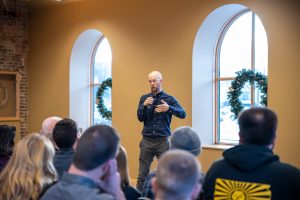 Clint Brown speaks to the audience at Failure Fest about his co-working venture, The Bakery.

“Many people watched the entire life cycle of The Bakery, so it was engaging to hear the story from Clint’s perspective,” Paulson said.

Regarding failure, Brown says he’s not one to think about it constantly.

“I had the privilege a few years ago to work with a bunch of high-performing individuals, and they just never talked about failure,” Brown said. “It wasn’t because they were successful with everything, but they just didn’t dwell on it, and I’ve been sort of privileged to not dwell on the challenge of this.”

Instead, he says he’s regularly reminded of the upside of the situation—namely, the numerous businesses he had the opportunity to help through The Bakery. Brown encouraged attendees to be more willing to take risks that could prove hugely beneficial for social good.

Hatch followed with the story of The Prairie Club, a destination golf resort in Valentine, Nebraska. Founded by Paul Schock, Hatch’s partner at Bird Dog Equity, the club experienced challenges at its outset that threatened to close its doors.

Schock brought Hatch onto the team to help turn things around. Today, they consider the club a success, but it wasn’t an easy road to get there. 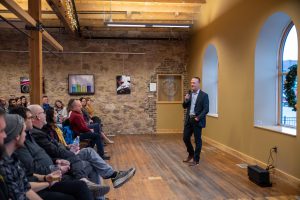 Chad Hatch tells the story of The Prairie Club.

“It’s never going to be a financial success, but it’s a success for the community and for the employees we’ve touched,” Hatch said.

Looking back, he says preparedness and commitment are critical when it comes to planning a new business venture.

“You can never do enough research, and you can never over-capitalize,” he said. “People don’t think it’s going to take as long to be profitable in business as it is, but they saw us finish. They saw our tenacity and that we stuck with it.”

Brown echoed this advice during the Q&A portion of the event.

“Be ruthless about asking for advice,” he said.

Around 125 people showed up for the inaugural Failure Fest event. Paulson credits the event’s success to the speakers’ valuable perspectives on a sometimes intimidating topic.

“We chose Chad and Clint because they are well-known business leaders in the community that have experienced both trials and triumphs,” Paulson said. 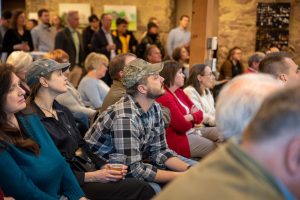 Around 125 people gathered at the Museum of Visual Materials for Failure Fest.

Plus, nothing takes the edge off entrepreneurial hardships like a themed beer. In collaboration with Remedy Brewing Company, Startup Sioux Falls created its own brew for the occasion, dubbed “Hoppy Accident,” which was described as an approachable hoppy wheat beer.

Attendees enjoyed free pours of the beer at the event, and Remedy also hosted an after party where guests had the opportunity to take a brewery tour and participate in a raffle for a $50 gift card.

“We were thrilled with how the event went, and we’ve gotten great feedback about it” he said.

Keep an eye out for upcoming events on the Startup Sioux Falls event calendar.