On Friday, May 29, the first cohort of the Falls Fintech accelerator program graduated virtually after ten weeks of intensive, remote programming.

Nikkee Rhody, co-founder and managing director for Falls Fintech, says the inaugural cohort faced unprecedented challenges in the form of the COVID-19 pandemic. The accelerator kicked off with a welcome reception in Sioux Falls on March 9, and just four days later on Friday, March 13, participants were sent home for safety reasons. 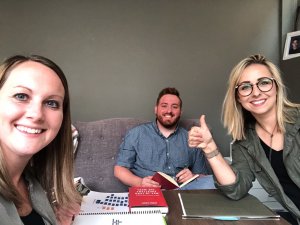 “It’s been a wild ride,” Rhody said. “We built our business with the mindset of being a residency program here in Sioux Falls, but we came to a crossroads with COVID and had to choose between keeping these same five companies and waiting, going completely virtual, or doing a hybrid. We brought a number of options to the cohort themselves, and it was unanimous—they all wanted to go virtual.”

After sending the five companies home, Rhody and her team spent just over a week pivoting, rescheduling speakers, and adapting programming for a virtual platform. For a program that was designed around the idea of engaging face-to-face and experiencing the Sioux Falls community, a pivot of this scale was challenging, and at times, discouraging.

“When we went virtual, we were kind of going into it blindly—all of our market research and planning showed us that in-person was the way to go—but it was really cool to see just how tenacious these people are,” Rhody said. “We learned so much in these last three months about perseverance and rolling with the punches. Starting a business is hard, and you have to have this attitude of endurance, come what may.”

Falls Fintech was created to provide best-in-class training for fintech startups, with a special focus on companies that aim to solve pain points for distressed audiences. The program operates as a subsidiary of Central Payments, the payments division of Central Bank of Kansas City.

“The mission of the bank is to create better financial experiences for everybody, primarily those underserved by most banks—often the low to moderate income consumers,” Rhody said.

With the accelerator, Rhody says the hope is to provide real substance, real connections, and real opportunity for participants.

Read more about Falls Fintech’s mission and goals in our previous story.

Rhody and her team had initially planned the ten-week program to include in-person meetings with local organizations like the South Dakota Bankers Association, activities such as 1 Million Cups, and individualized experiences like connecting with mentors, meetings over coffee, and simply getting to know the city of Sioux Falls and the quality of life it affords.

Instead, planned speakers were rescheduled for Zoom sessions, and connections were made virtually. Rhody says the rescheduling process was one of the most challenging aspects of the virtual accelerator.

Companies participate in a Zoom session.

“We had a really intentional order for the speakers at first, and the way the rescheduling worked out felt less than intentional,” she said. “By week seven, we were finally getting around to things we should have gotten to in week two and it would feel a bit off. Everybody was accepting, but in my mind it fell a little short of the intentionality.”

Despite the challenges of connecting remotely, the accelerator participants seized opportunities to grow their businesses. From continuing to raise funds amidst COVID-19, to developing intentional connections with members of the Sioux Falls community, Rhody says she was amazed by the grit and determination they displayed.

She gives the example of one of the participants, a Los Angeles-based company that develops an educational product around financial literacy.

“He connected with a local professor who invests in high school curriculums—his exact audience—and they made a strategic partnership that will allow him to grow at a huge scale right off the bat,” she said.

Beyond the industry and community connections, participants were also able to engage with one another in meaningful ways. For founders navigating the world of entrepreneurship alone, finding a peer advocate is powerful. 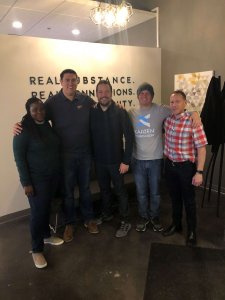 The five members of the first cohort gather in-person at the kickoff and welcome ceremony.

“We considered personalities when we were doing the interviews to make sure the dynamic would be cohesive, but we never expected it to go as well as it did,” Rhody said.

Moving forward to the second cohort

Though the first cohort has graduated, the Falls Fintech team will continue to stay in contact with companies via one-on-one calls, as well as continued introductions and partnerships.

“The formal programming is over, but we’re not just dropping them,” Rhody said.

In fact, one of the goals of the accelerator program was that Central Bank of Kansas City would sign at least four of the ten companies (planning for two cohorts of five participants each per year) and bring them to market.

The second cohort will kick off on August 10, though it’s not clear yet if that will happen virtually or in person. The Falls Fintech team will assess the safety of the situation in regard to COVID-19 and come up with a decision by the end of June.

“I still have this vision and dream that it will be a full ten-week, on site residency program, and I’m hoping it’s this fall,” Rhody said. “I believe in the value of bringing these companies and entrepreneurs to Sioux Falls to be incubated. I think this is the perfect place for it, and we want to give a huge kudos and thanks to the community. People really rallied around us and cheered us on.”

Interviews for the second cohort have commenced, and the lineup will be announced in July.

For more information about Falls Fintech, visit their website at www.fallsfintech.com.