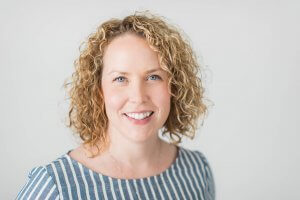 Only about one in three businesses achieve the milestone that Cindy Elifrits Peterson just marked: one decade as a small-business owner.

Elifrits Peterson celebrated the 10-year anniversary of her business, Maximizing Excellence, on July 15. It’s the latest chapter in a success story built on the passion and drive she brings to her work that started at Zeal Center for Entrepreneurship – known at that time as the South Dakota Technology Business Center – as a formative step in her journey.

Before  starting her business, Elifrits Peterson – who has a master’s degree in social work – was involved in fundraising for the Sioux Empire United Way. Through that work, she found herself unsettled by the way a variety of outside agencies, organizations and volunteers were operating.

“There was just this constant underlying frustration that I had with the way organizations were going about their work,” she said. “It was so transactional, whereas my focus was on how we invite people to invest in something important to them that they can’t do themselves.”

That frustration and unique perspective turned out to be the catalyst that drove Elifrits Peterson to entrepreneurship in 2010. 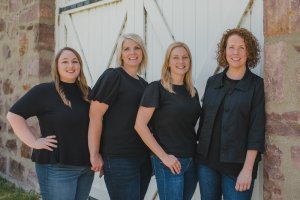 Today, Maximizing Excellence is a full-service, nonprofit consulting firm, with an all-female team of four. Its mission is to partner with organizations that want to improve their effectiveness and achieve high impacts.

Over the past 10 years, Elifrits Peterson and her team have worked with 117 nonprofits in six states, leading fundraising efforts that generated more than $20 million.

While the numbers are impressive, the passion within the business is for nonprofits serving in the area of health and human services.

“There’s something really special about working for the small but mighty mission– an organization that’s all volunteer-led,” Elifrits Peterson said.

“Our magic is resource development – anything that comes with inviting a person to invest in a vision – we do that better than anyone else,” Elifrits Peterson said. “That was the product, the expertise and the special sauce that has driven these 10 years of success. I saw that it could be done differently, and that has led to not only the success of my business but the impact that it’s created in the community.” 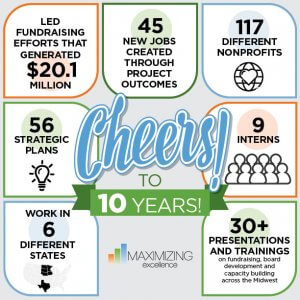 Building a foundation at Zeal

Elifrits Peterson has a consistent history of proving her value to clients and partners alike.

She spent her first six weeks in business running things from her kitchen table before deciding she needed more structure. At the time, Zeal’s facility housed only research and technology startups, but she knew that the infrastructure and support offered were exactly what she needed.

Zeal initially turned her away because the business didn’t fit within its scope, but Elifrits Peterson wasn’t giving up.

“I said, ‘I still want to be here,’ and I had to write a letter and a proposal as to why they should give me an exception,” she said. “I presented in front of their board of directors and asked them to reconsider who they were bringing in their doors.”

Elifrits Peterson ended up spending the next three years in the facility, and in 2014, Zeal even became a client, hiring her to facilitate its strategic plan.

“They knew they were at a point where something needed to shift, and I conducted the planning sessions, focus groups, research and data that all contributed to their outcome,” she said. “It was from there that they made the changes that have led to what we all know now as Zeal. Now, if you think about the different businesses they support, they’ve brought in the scope of their partnerships, and that’s where it began,” she said.

“That infrastructure was really important,” she said. “It contributed to the legitimacy of what I could do and elevated the perception of my business. I can’t even tell you the value of it – it’s a game-changing resource that I got out of Zeal.”

Gene McGowan served as one of Elifrits Peterson’s mentors while she was getting started.

“Cindy was one of the most energetic and get-the-job-done people that you could imagine,” he said. “From a mentor’s point of view, she would have gotten there anyway, but what really happens in the mentoring process is it’s a shortcut. You don’t have to do everything wrong first; you don’t have to do the trial and error.”

The guidance provided by McGowan and the rest of Elifrits Peterson’s mentor team at Zeal helped her articulate and identify the areas in which she was least equipped as a business owner. 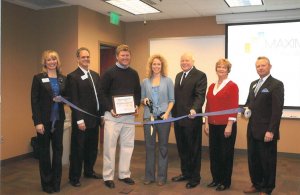 “I approach the work I do with a social work lens, and that again is where Zeal fits in,” Elifrits Peterson said. “You don’t take finance classes when you’re getting a social work degree, you don’t take projection and business management. I didn’t start my business because I wanted to work on a budget spreadsheet. I had this vision, but I needed help.”

Now, Maximizing Excellence has an office in downtown Sioux Falls, and Elifrits Peterson is grateful for the support that the community has provided over the past decade. It has been a critical element not only as she was building her business but also as she continues to carry out its mission, she said.

From economic development to health and human services, Maximizing Excellence is committed to uplifting organizations that enhance quality of life. Sharing the stories of these nonprofits and highlighting the value they bring to the community is key to that success.

“If the community leaders didn’t believe Sioux Falls and the organizations here were worth investing in, they wouldn’t invest in them, and I see them as a critically important piece of why what we do works,” Elifrits Peterson said. “It’s an honor to contribute to the business community through our work.”