CO.STARTERS is an experience designed to provide structure, support and resources for entrepreneurs to execute on their business ideas.

Participants represent a variety of industries. For instance, Naomi Blank started Ubwiza Boutique in July 2020, Nate Boscaljon has owned his own woodworking business since 2018, and Sanaa Abourezk has operated her Mediterranean restaurant, Sanaa’s 8th Street Gourmet, for 17 years.

“Each entrepreneur came to CO.STARTERS with different hopes for their business’ continued growth, and we’re excited to lift up some of the developments they’ve already made,” said Brienne Maner, Zeal’s executive director.

Blending her passions for education, culture, and fashion

If you’ve been following along with our CO.STARTERS coverage thus far, you likely know Naomi Blank as the founder of Ubwiza Boutique. 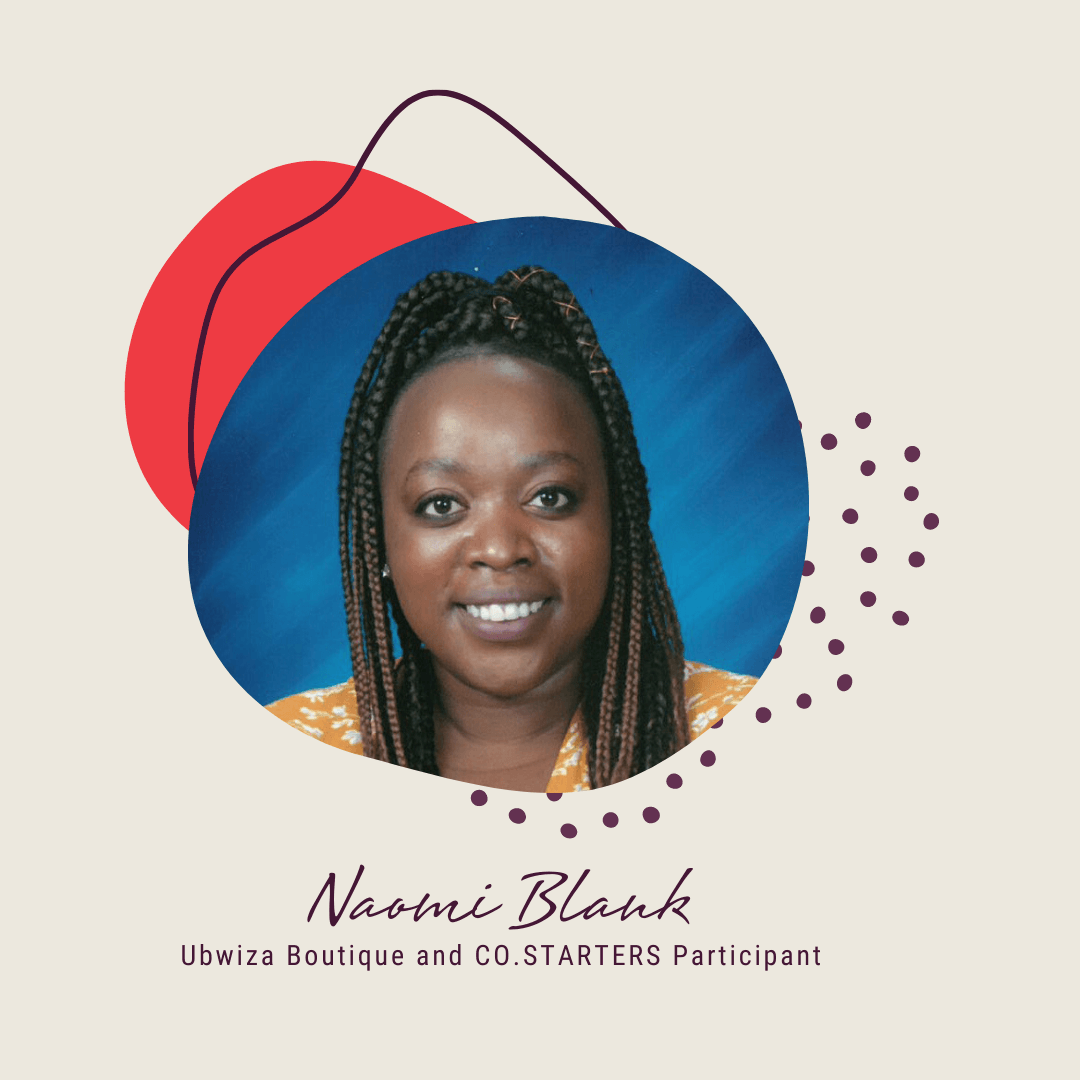 But the boutique, which blends African and American fashions, is just one of Blank’s passions and pursuits — though it’s one she hopes will someday take center stage.

When she’s not working on Ubwiza, Blank is an English language teacher at Anne Sullivan Elementary, the school with the city’s largest population of immigrant and refugee students.

Blank came to Sioux Falls at just 8 years old as a refugee of the Rwandan genocide.

“I think it’s really amazing how my life has come full circle. I started as an English language student myself, I had teachers who inspired me, and I wanted to be just like them, and here I am being able to give back to these students and being able to mentor them in a sense,” she said.

“I want to show them that you may have dealt with hardship or you may not understand this culture, but with hard work, you can do it. You can really do anything you want to.” 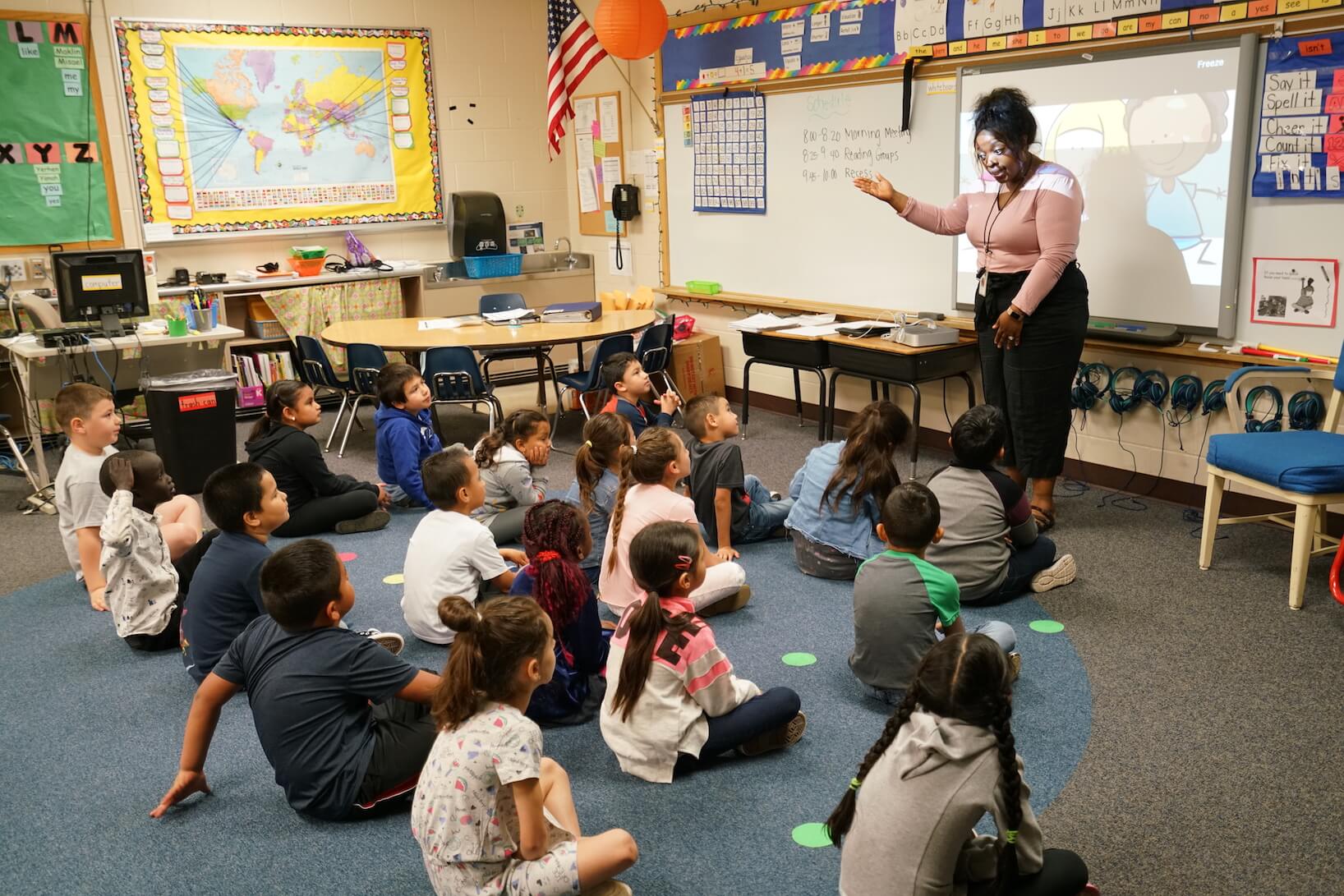 Blank is also back in school herself, pursuing a master’s degree in leadership that will open up career opportunities in education administration.

Still, being a full-time teacher and student hasn’t stopped Blank from pursuing her dream with Ubwiza. Though she has always had a heart for education, she said she wanted to do more.

“I knew I wanted to own a boutique, but I wasn’t sure if I had the vision yet,” she said. “My husband and I were brainstorming, and I said I didn’t really want just another boutique, so we started talking about education and why I’m in it — because I want to make an impact, I want to teach these students who I am and about my culture.”

Blank and her husband, Eric, also discussed Sioux Falls’ demographics and how difficult it is to find African clothing despite the city’s growing diverse population.

“We started thinking, ‘How could we offer something more, a wider experience?’ and that’s what we decided to go with,” Blank said. “I’m very much tied to this American culture, but there’s also this African culture that’s part of who I am, so it was all about how we can bring those two together and educate the community about the cultures around us.” 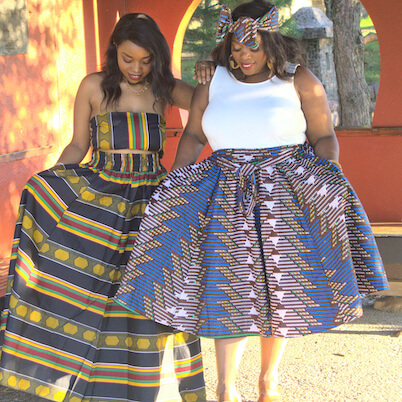 Ubwiza, which means “beauty” in Blank’s native language of Kinyarwanda, offers unique pieces that allow people to incorporate African style into their wardrobe. Blank is working hard to source her African pieces from makers in Rwanda and other countries to keep her offerings as authentic as possible and provide jobs for people in Africa.

“I love the African styles, I love the patterns, those bold unique looks that we don’t see very often,” Blank said. “My goal is to incorporate that into this culture with something that’s just unique and different, not necessarily head-to-toe African, but a way to include it in my everyday wear.”

She said one of the biggest challenges is bridging the two cultures.

“We don’t want people to feel like they’re offending us by wearing an African piece. We encourage it,” she said. “We’re welcoming you to our culture and sharing who we are and that Sioux Falls has these different cultures.”

Developing that mission and refining her customer audience has been a huge piece of the CO.STARTERS program for Blank, who runs the business with her husband and her sisters.

“I’m grateful that I’m part of the program because it’s helped me refine who we are, what my mission and vision is, and to set goals,” she said. “I just needed that accountability or that push. That’s really been key, and we’re seeing the gains from the hard work we’re putting in.”

Gathering the right tools to build his business

A financial adviser by day, Nate Boscaljon has turned his hobby of woodworking into a side hustle, and ultimately, a growing business. 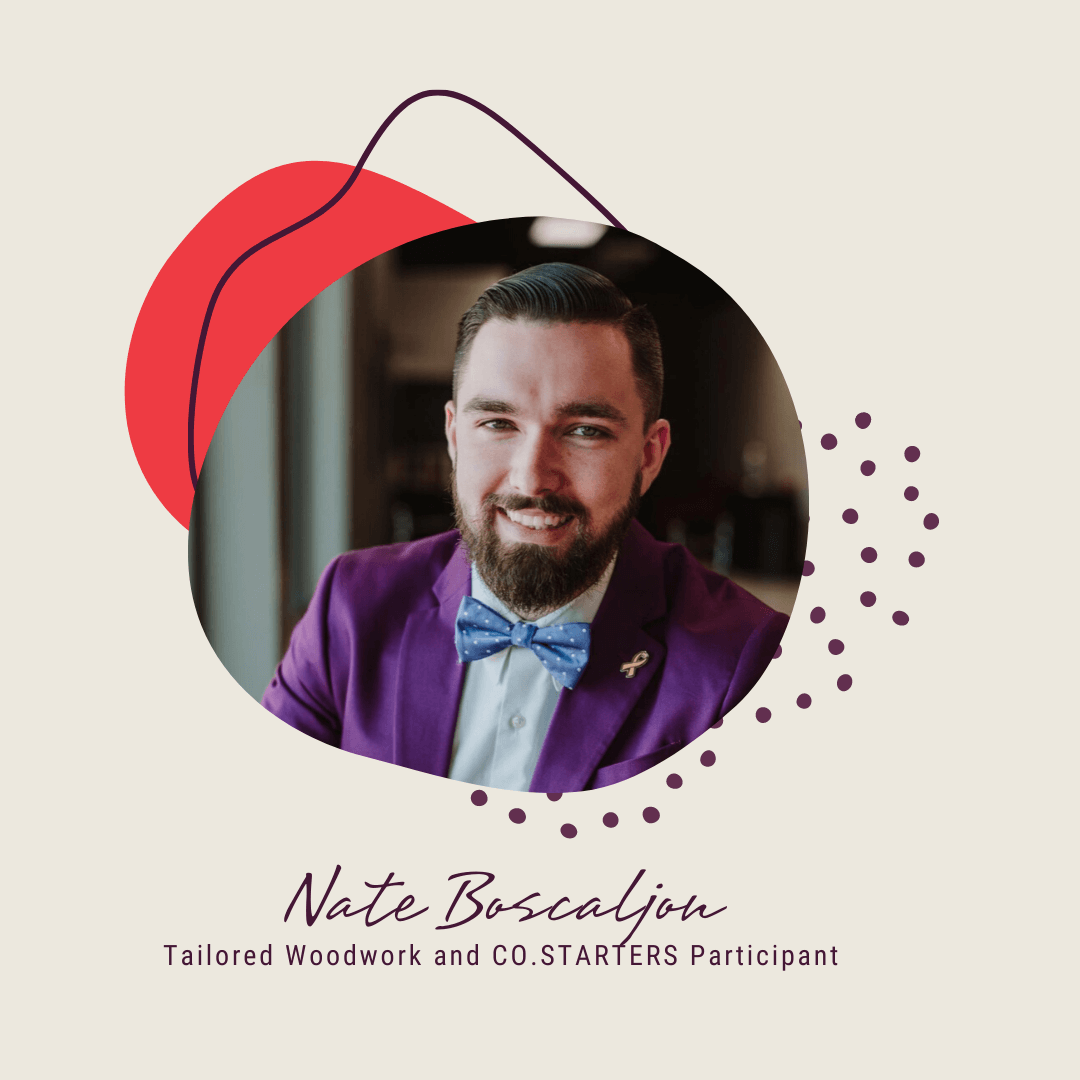 Tailored Woodwork is a custom shop that primarily builds home furnishings. Boscaljon also has created pieces for businesses, and he’s looking to expand with a line of handmade toys.

Though the business officially started in 2018, Boscaljon made his first piece of furniture in 2016, when he and his wife were trying to furnish their first home as newlyweds.

“We were trying to buy furniture, and we didn’t want to pay the prices the big-box stores were asking for what seemed like low quality,” he said.

Soon, he had built a coffee table, a few end tables, a TV stand and a dining room table. By the time he ran out of things to make for his own home, friends and family started asking for pieces. Once word of mouth began taking off, Boscaljon knew it was time to take things seriously and operate as a legitimate business. 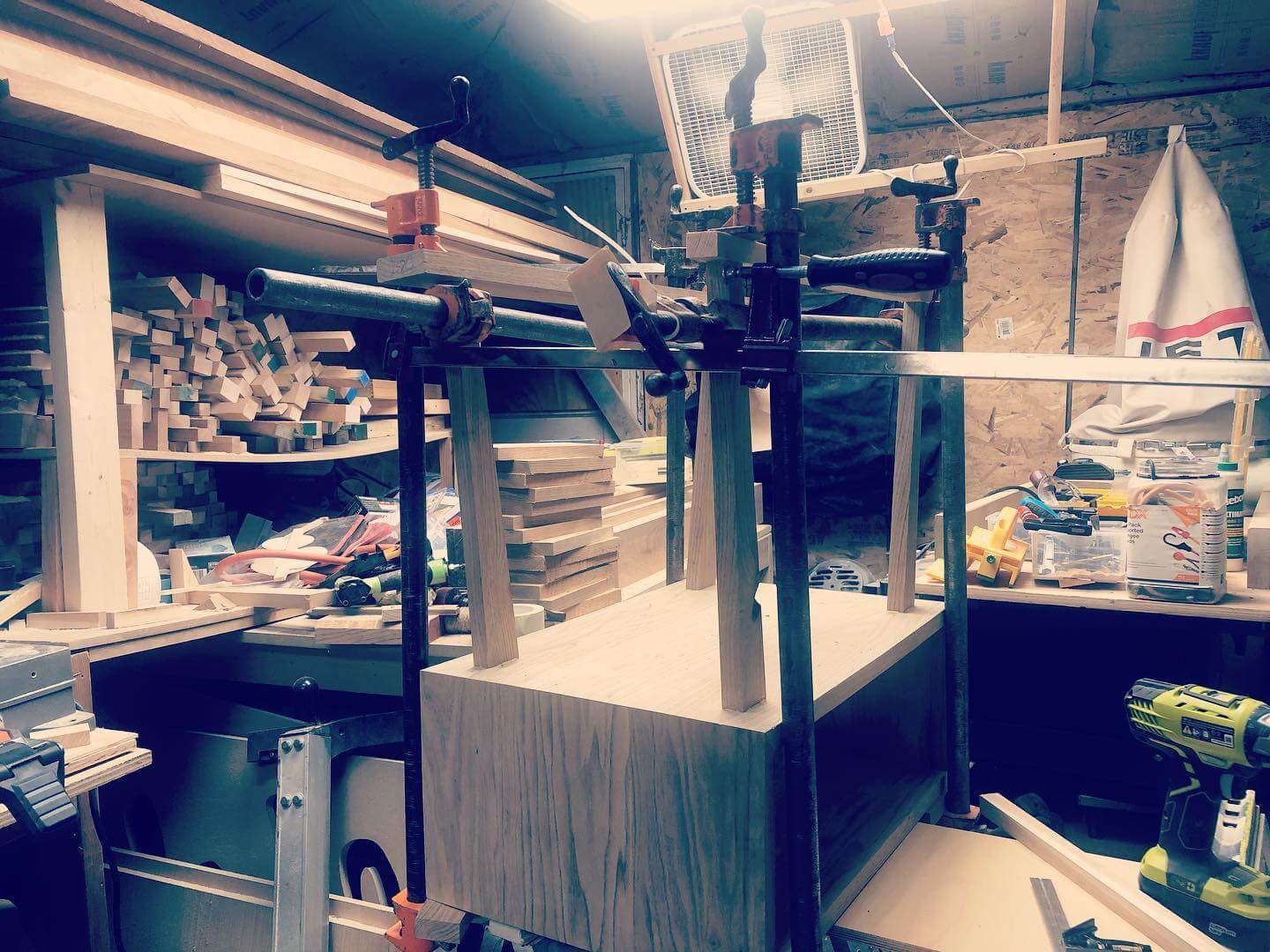 He joined CO.STARTERS looking for help with that business side of things and refining his vision for the future.

“Especially with a business where it’s so hands-on, the hardest thing has been to step out of the workshop both physically and theoretically,” he said.

“It’s hard to step out and look at the business as a whole and not just the project I’m working on at the moment. How does it sustain itself? How does it grow?”

Boscaljon said CO.STARTERS has already forced him to take a hard look at things like pricing and product lines, but the true value has been in the community.

“The content has been good, but I’ve been saying that the value comes in the people more than the content,” he said. “It’s helpful to be around people who are in similar places and mindsets, people who are willing to connect. The community feels really open and authentic.”

Boscaljon’s ultimate goal is to someday operate a storefront business downtown with the purpose of building furniture but also being a community space where people can be creative in their own capacity. He would provide the tools and guidance on techniques, all focused on a more traditional approach.

Learning to ask for help

She started with just soup and bread, and slowly began expanding the menu, adding salads and finally main dishes. It was all about convincing hesitant customers to try something new. 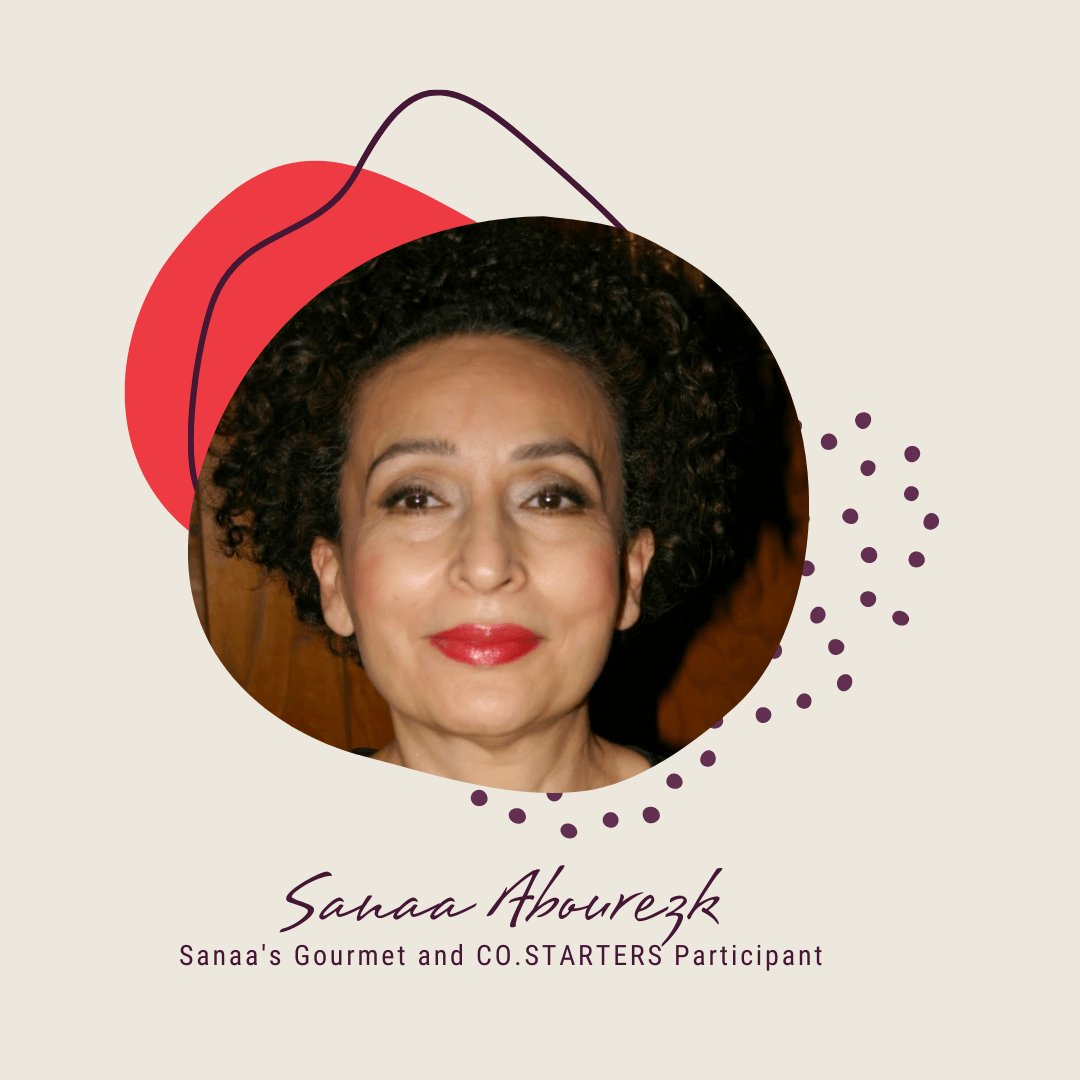 “Little by little, we started changing their minds,” Abourezk said. “Let’s put it this way, we started out with 20 bunches of parsley, and now we chop 200 bunches. We started with 5 pounds of eggplant, and now we do 60 pounds. It’s stuff people here never used to eat.”

Abourezk grew up in Damascus, Syria, where she received her bachelor’s degree before traveling to the United States to earn her master’s degree in food and nutrition. She returned to Damascus but was unable to find a job, so she came back to the U.S. to pursue her doctorate.

While studying in Washington, D.C., she met her husband, Jim, who was from South Dakota.

Abourezk traveled to Paris and Italy to study pastries and sauces, and upon returning to South Dakota, she had the opportunity to rent the space in 8th & Railroad Center that would become what is now known as Sanaa’s.

Over the years, one of the greatest challenges of owning a restaurant has been the uncertainty, she said. 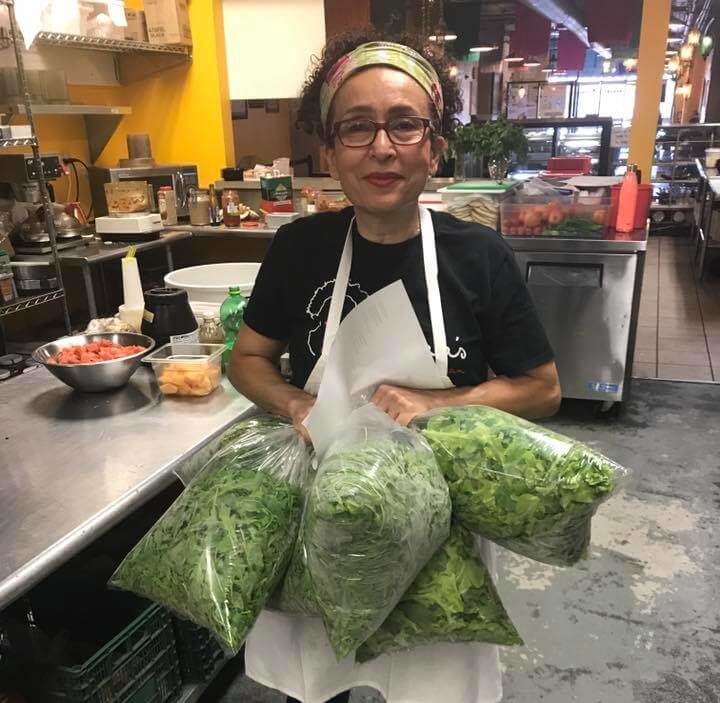 “It’s not predictable; it’s not like you have a contract,” she said. “If you have a dress shop, the dress will be OK the next day, but food will not be. We make everything from scratch and take pride in that. People trust me I’m not going to let food sit for a week.”

Another challenge is finding and retaining employees. Abourezk said most chefs will tell you they have two good employees and the rest are temporary. She feels lucky to have the staff she does but admits that the work is exhausting, particularly now during COVID. She pitches in wherever work needs to be done, whether it’s cooking, mopping or doing the dishes.

“COVID happened, and I’m so proud of my staff and myself. We haven’t taken a day or an hour off. We’ve been hustling business to stay open, but it’s absolutely exhausting.” she said.

When the opportunity to apply to CO.STARTERS came about, Abourezk knew it was the right time, regardless of her busy schedule. She hopes to find an opportunity to package and sell some of her dishes in stores, creating an additional source of income. 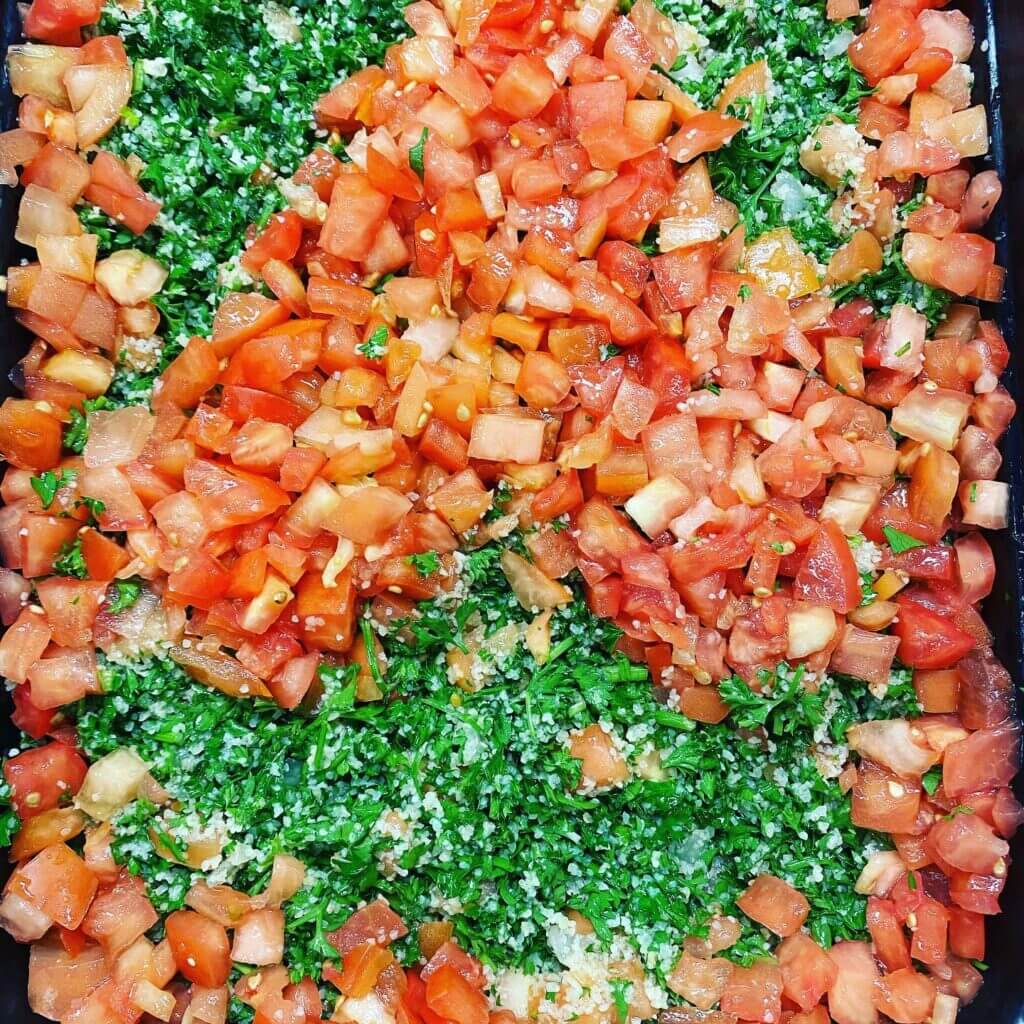 With the rising demand for plant-based foods and meals, now is the time to make it happen. She envisions starting with simple items such as soup.

“If you look at the grocery stores, the plant-based meals are like mac ’n’ cheese, stir fried rice and risotto, nothing that crazy or unique, so there’s definitely a market for it,” she said.

During CO.STARTERS, Abourezk said she has learned a lot about herself that will be helpful as she moves forward.

“It’s hard for me to ask for help, but I really have to do it if I’m going to move on with my project,” she said. “I’m getting more gutsy. I’m learning more about how to price products and how not to be shy about asking for a good price.”

Abourezk’s priority is finding a co-packer for some of her meals so she can get them into grocery stores — and soon.

“I would love to get started with it as soon as possible,” she said.

These amazing entrepreneurs are just three of the 15 talented participants in our first CO.STARTERS cohort. Stay tuned to learn more about the others, as well as how you can apply to our upcoming cohort, at startupsiouxfalls.com.