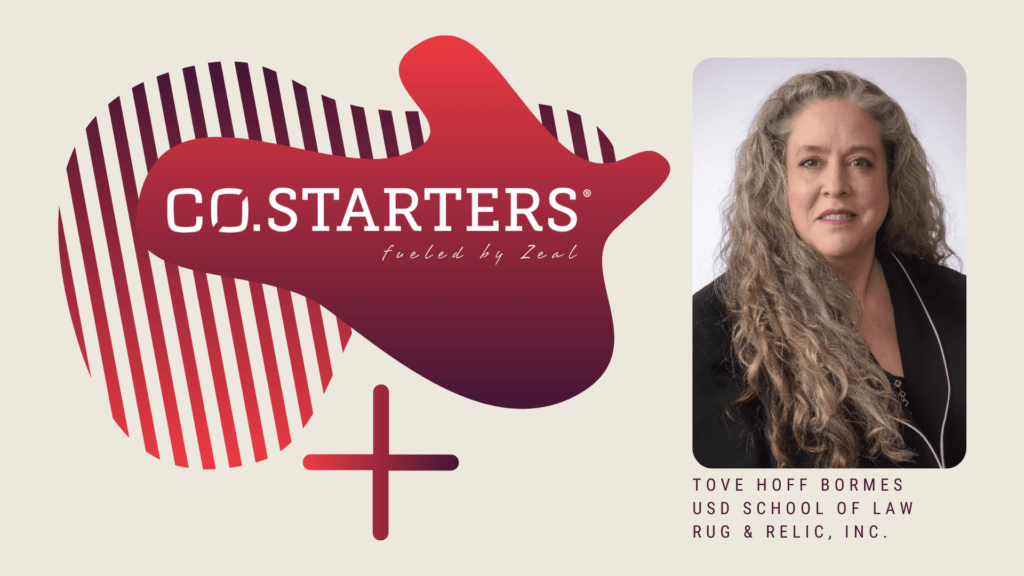 Applications have been submitted, participants have been selected, and the team at Zeal is preparing to launch its second CO.STARTERS cohort.

This time around, the group will be led by two facilitators — Tove Hoff Bormes and Ty Vuong — a pair whose combined experiences promise to offer wisdom and inspiration for new entrepreneurs.

If you missed our Q&A with Vuong, check it out here. Otherwise, keep reading to learn more about Hoff Bormes, a former professor, collector of art, owner of Rug & Relic and the director of development for USD’s School of Law.

The following interview has been edited for length and clarity.

Hi, Tove! Tell us about yourself and your business experience.

I’m originally from Rapid City. My parents were military and they retired out there, but we definitely had a world-traveling family. That was in my blood early.

When I finally finished undergrad, I went to law school at USD. I would describe myself as a jack-of-all-trades because there’s not a lot that I’m too intimidated to do. I’ve found that if you just jump in, most of life can be tackled by just having the courage to say, “Well, I’m willing to try, let’s see what happens.”

As a result, when I graduated from law school, I clerked for the 5th Circuit and then opened my own law practice doing employment law and a lot of union litigation. Then I went to Northern State University, where I taught through tenure. The year I got tenure was the year we opened Rug & Relic in Sioux Falls, so I commuted for a year because I just didn’t want to leave Northern. That drive from Aberdeen to Sioux Falls was enough to show me that wasn’t a good plan though, so we moved and went on to run Rug & Relic for almost 16 years when we decided it was time to close the gallery.

There were a lot of things about the business that were really physical. The day we decided to close, we had 603 rugs in inventory, all of which I’ve personally moved at least five times. In any given week, we might move 350 of them two or three times at minimum. At some point, reality strikes that “Yes, I can physically do this right now but is that a good 15-year plan?”

We’re really hoping to make a shift to something that’s a little easier to sustain. The hallmark of what we had been doing was something that’s very one of a kind. At any given time, our website would have 2,000 to 3,000 individual items on it, and maintaining that level of individuality in inventory was intense, to put it mildly. So that’s where we are now — right in the middle of a reinvention. We’re back to R&D and back to the drawing board.

I said to Brienne Maner the other day, “I kind of wish that instead of leading this cohort, I was in it,” because anytime you start over, you have to make your way back through this process. So when I’m doing this, I’m going to be leading it and doing it. When I did my CO.STARTERS training, I just thought, “Oh, my God, where was this when I was doing this 15 years ago?”

Tell us a little more about Rug & Relic.

I think the best definition I ever heard was from a customer who said, “This place is a museum with price tags.”

I absolutely love that because our core value as an institution was authenticity. It was a crucial concept that, regardless of what it was, it would be real, authentic, handmade and one of a kind. 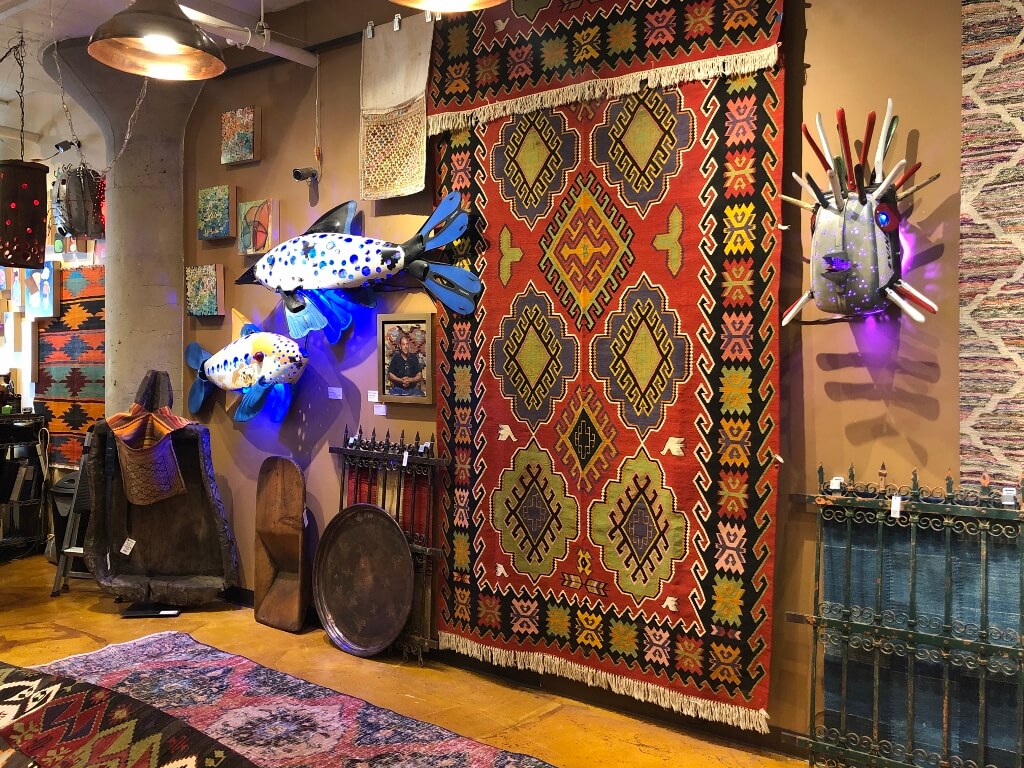 My husband Steve and I have both always been pretty engaged with art. We started collecting, and over the course of our lifetime, it’s really been the only thing we’ve collected. Some people get houses and amazing furniture — Steve and I had art. We never got around to purchasing nice furniture because the answer to everything was, “You sit on the couch and look at what’s on the wall and the floor, not the other way around, so who cares what the couch looks like?”

Nobody thought we should do it in Sioux Falls, and there’s part of me that says if we’d done it somewhere else, we’d probably still be doing it, but I’m not sure that would have been better. When we opened up in 8th & Railroad, there was absolutely nothing there. Sanaa had opened about two or three months before we did. Josephine’s was there and Sticks and Steel, but there was no retail, no restaurants, no bars, no hotels.

Taking your idea from a big, exciting dream to boring, everyday checklist items is extremely difficult. It’s easy to get lost in the weeds, but there’s a lot of things about taking the next steps that are not fun or inspiring, they’re just work. The difference between dreams and entrepreneurship is a willingness to tackle the tedious, to go through all the steps.

What are you most looking forward to with CO.STARTERS?

I will tell you that there is no energy on earth like the energy of a whole bunch of entrepreneurs going, “Wait a minute, I have this idea.”

When I said I was going to do this in addition to my full-time job with USD, one of the ways I pitched it to them is that these are people I want to know. These are the kinds of people who bring that energy we’re looking to tap into.

What I’m doing with the university is very entrepreneurial in nature. I’m almost a facilitator for the people I talk to. I’m asking what their dream is, how I can help them build it, what’s important to them and what I can be doing for them.

What would you consider a success coming out of this program? What do you hope participants achieve?

The older I get, the more I see success as defined by a sense of belief in what you’re doing. Success from this program I look at as direction and the confidence that comes from knowing you’ve vetted your process.

CO.STARTERS gives you the ability to see the whole picture, to see everything and to make progress as an entrepreneur. One of the hardest things to get past is that sense of vulnerability, that feeling that if anyone says anything about your concept, that you’re going to take it personally. If you want to be an entrepreneur, somehow you’ve got to find a way past that.

My hope is that we’ll create an environment where people will feel comfortable building trust, where they know they can come for honest and constructive thoughts.

When you think of the entrepreneurial community in Sioux Falls, what comes to mind?

Every group of entrepreneurs has an incredible energy, but there’s a dynamism to this community and to Sioux Falls in general. They’ve worked so hard to create this spirit of positivity and support that I think is vital for entrepreneurship. They’ve done a masterful job of fostering that, and I’ve been around long enough to watch that ebb and flow.

Sioux Falls has done a really good job of trying to keep that positive momentum going in the entrepreneurship community, and as a result, we’ve seen some amazing businesses hatched out of this place. South Dakota, and Sioux Falls in particular, have done a good job of fostering individuals in a way that retains people’s individuality but provides them with a sense of community.

What do you bring to the table for this group of participants?

I am nothing if not an out-of-the-box thinker. That is my strength in the universe — the ability to take whatever it is that’s thrown at me, jumble it around and poke holes in it, for lack of a better way to put it.

I’m a good strategic thinker, but I’d also say I have a lot of experience in what not to do, truly. I’ve invented a lot of wheels that I probably didn’t need to, simply by virtue of not thinking about what anyone else was doing. I’d have been more successful more quickly if I’d understood where the help lies.

I really hope that I also bring a certain amount of inquisitive positive energy. I want to know the answers to all the questions.

Keep your eye out for Zeal to announce the participants of its second CO.STARTERS cohort, coming soon!

In the meantime, learn more about CO.STARTERS here.