July is Culinary Arts Month, and we’d be remiss if we didn’t take the opportunity to highlight some of the entrepreneurs who are keeping Sioux Falls’ dining scene fresh.

Back in May, downtown welcomed two new businesses—Harvester Kitchen by Bryan and Gist Wine Shop. While both owner-operators hail from out of state, both Bryan Moscatello and Mel Guse have ties to Sioux Falls.

Chef Moscatello hails from New Jersey, and he has worked in esteemed kitchens in locales such as Aspen, Napa Valley, Chicago, Washington D.C., and even Panama. However, his wife Jaime is from Sioux Falls, and frequent trips to visit family have acquainted Moscatello with the city over the years.

Guse grew up here, leaving to spend some time in the other SF—San Francisco—as well as nearby Minneapolis, where she opened GYST Fermentation Bar in 2014 with her sister, Ky.

We’re excited to welcome these talented folks back to South Dakota. Keep reading to learn more about their ventures.

Chef Moscatello’s concept for Harvester Kitchen is one he’s been developing for years. 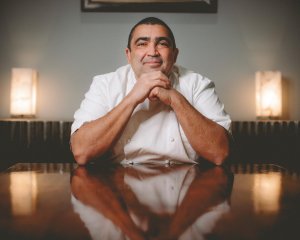 The restaurant—which opened in May, taking over The Market’s former space in the Harvester Building—creates the experience of gathering friends at home for a dinner party.

“I’ve always liked dinner parties, I like the execution of it, and I think, more importantly, the premise is that I want people to feel really welcome right away,” he said.

“It’s that more relationship-based business model, you know, as opposed to, ‘Get them in, and get them out,’ I’d much rather have, ‘Come into my home, enjoy, relax, here’s a cocktail. sit down, we’re going to have dinner.’”

Moscatello designed the restaurant’s layout to reflect spaces in a home like a living room, den, dinner nook and formal dining room. He also made an effort to tie in the local community and create a sense of place with the design. 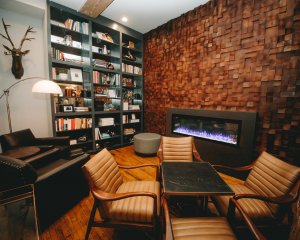 “I’ve watched Sioux Falls grow over the years as we visited, and it became enticing to me. With everything that was going on, I felt that I could contribute, and I really want to work and be part of the community. I don’t want to come off as an outsider,” he said.

In tribute to the community, graffiti in the entryway reads, “DTSF,” and a large gallery wall features a triptych image by Paul Schiller, shot in Mitchell.

As far as the menu, Moscatello describes it as innovative American cooking, prepared using techniques steeped in old-world, primarily-French style. Though the offerings are constantly evolving based on the seasons and availability, there are several mainstays, like the sunchoke tortelloni and the rotating French potato dishes.

The French potatoes were inspired, in part, by his business partner, Jim Entenman, a longtime Sioux Falls native.

“When I first met him, he was definitely Mr. Meat and Potatoes, and he still kind of is, but he’s always eaten whatever I put in front of him. I’ve always appreciated that he would try anything and everything, and so when I decided to move here, I thought about what I could offer that’s going to be unique to this area. People love potatoes here, as much as I do, if not more, so I thought I’d do a really fun play on French potatoes.” 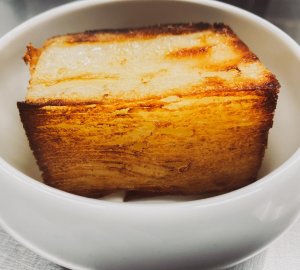 Harvester Kitchen has been open since May 12, and Moscatello says it’s been well-received so far.

“I think people are very excited to have a different option that is truly unique to the area, and they’re not as used to the chef presence on the floor, you know, I’ll get out, and talk to tables. So far, people seem to be very engaged with it and excited to be seeing a different food product than normal.”

Harvester Kitchen by Bryan is open Wednesday through Sunday. Reservations are recommended, and can be made at www.harvesterkitchensf.com.

After spending five years in Minneapolis, where she and her sister created a community around naturally fermented foods, wines and other beverages, Mel Guse returned to her hometown of Sioux Falls in 2019, working as a wine buyer for Look’s Marketplace.

She quickly learned that the community—and its wine enthusiasts—had come a long way since she was last a resident.

“It’s interesting to see how Sioux Falls has grown since I grew up here. There’s quite a bit of opportunity here, and I’ve met a lot of amazing people who really do love wine,” she said. 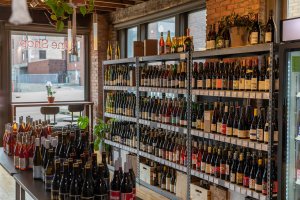 What caught her attention, however, was that those wine lovers weren’t buying locally.

“It was all direct through wineries or third-party shippers,” she said. “When you think of South Dakota, it’s not a hugely populated state, and there were requests for some of these harder-to-get, more sought-after wines. There’s a really great community here that wants these wines.”

So, Guse took matters into her own hands. She opened up a retail business, Gist Wine Shop, in May on 11th Street in downtown Sioux Falls. In the style of her former venture, GYST, 85 to 90 percent of the wines she carries are naturally fermented.

“Wine is a natural product, it’s what kept us thriving for thousands of years. But a lot of the technologies we’ve developed over the years have changed the way we’re producing a lot of agricultural products, not just wine. It’s the idea of going back to what was and not overproducing or trying to manipulate something that’s always just been a natural product,” she explained. 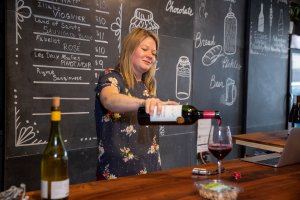 In addition to wine, Gist offers a selection of ciders, as well as non-alcoholic beverages like house-made kombucha. A small array of charcuterie is also available for purchase, and Guse hopes to grow these offerings moving forward.

In addition to the take-home options, Customers are welcome to sit down at the bar and enjoy a glass of wine or kombucha, depending on what’s uncorked and on tap.

Besides sipping and shopping, Gist also offers wine tastings and a variety of classes and events, several of which are coming up in the next few weeks.

On Saturday, July 24, the shop will feature a tasting of chillable reds, which are lighter in tannins, brighter and fun for summer. The tasting is open to anyone who stops by throughout the day. 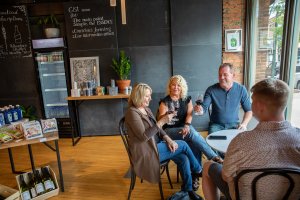 On August 1, the shop will host a Kombucha Workshop from 2 to 4 p.m. Tickets are $40 and include a home-brewing demonstration, tasting workshop and a GIST Mother (SCOBY). Attendees will also receive 10 percent off their purchase of a kombucha kit.

For August’s First Friday, the shop will host an event called The Gist of Fermentation from 7 to 9 p.m. Tickets are $75 per person and cover all food and drink.