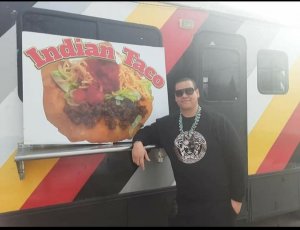 Watecha Bowl's owner, Lawrence West, outside of his food truck.

Lawrence West, the restaurant’s owner and founder, never imagined he would be running such a successful, well-known business. He had previously been operating a small custom t-shirt company, and around March 2020, noticed there were no Native American restaurants in South Dakota, or even nationwide. It seemed like the right opportunity.

“I’ve always cooked, I grew up in the kitchen, so I just started looking for something that would be a reasonable price. I stumbled upon a food truck that was in decent condition, grabbed it, and it just happened like that. It was about a two week thing,” he said.

“This was never my dream. I literally started this journey off sheer survival, and then it just made sense to me and evolved into what it is today,” he said.

Since launching in 2020, Watecha Bowl has gained an immense fan base with over 11,000 people following its Facebook page and patrons coming from all over the country—and the world—to eat there. He quickly purchased a second food truck, and in April 2021, opened up his storefront on West Madison Street in Sioux Falls.

In fact, West recently received a message from a woman in Dublin, Ireland who said that her first vacation after the COVID-19 pandemic calms down will be to South Dakota to eat at his restaurant.

“To me, that’s crazy. People come from all over the world to eat here, they make it a point to eat here.”

What’s on the menu?

When West first started Watecha Bowl, he thought the food would be a hit with locals for its familiarity.

“I just thought, ‘It’s South Dakota, who doesn't know what an Indian taco is?’” he said.

As it turned out, only a small portion of his customers were familiar with the Native American cuisine. That didn’t keep them from flocking to the food truck—and later, the storefront—to enjoy Watecha Bowl’s menu.

As for West? He enjoys sharing his Lakota food and culture with the community.

“We sell a pow wow, fair-style food, this is the type of food that’s at all of the cool Native American get-togethers. The reason I think it’s growing so much is that this way of life and this style of cooking is lost amongst our people,” he said.

“These recipes have been handed down in my family. My mom and my aunt cooked them, my grandma has cooked them, we can trace them back in our family for a couple hundred years.” 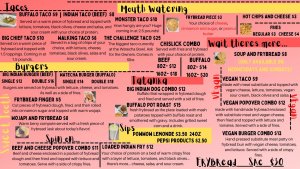 The menu includes Indian tacos, made with either buffalo or beef, served on warm frybread and topped with lettuce, tomatoes, black olives, cheese, salsa and sour cream. Other features include burgers served on frybread, the Big Indian Dog (a buffalo brat wrapped in frybread dough and fried), chislic, and sweet treats, including wojapi (a traditional Native American recipe for a warm berry compote) served with fresh frybread.

“We use all the freshest ingredients we can source, including fresh-kill beef and buffalo. Whatever you’re eating was living in the last 72 hours. We don’t get processed food, we season, process, salt and control all the ingredients that go into our product, and as soon as you order it, that’s when it’s made,” West said.

Watecha Bowl has seen incredible growth in the little over a year since it opened. From the constant stream of customers to being featured in numerous local news outlets, the American Airlines in-flight magazine and now Good Morning America, West says the recognition means the world to him.

“I built this with my bare hands, I put every screw into this place. Not only do I do the cooking, but I built these food trucks, this restaurant. It’s my family, my time, my money, it’s important to me. This means the world to me. People say that, but this isn’t McDonald’s, this is my business, and I built it. People don’t have to come here, they choose to come here.”

West’s plans for growth include opening another location in Sioux Falls and spreading out from there to locations like Rapid City, Flandreau, Sisseton and Rosebud with franchise locations, food trucks and drive-throughs.

He hopes his success can be inspiring to other Native American people as well.

“We, as a people, have a very sad background, so I’m an anomaly right now. My vision for where Native Americans should be is quickly closing the education gap to give us a platform. That’s what I’m working for, but what we’re doing is a hard concept, even for our own people,” he said.

“A lot of people don’t get to hear that part, because I like to keep the focus on my food, on my restaurant, on my customers, and my employees, but that’s the reason it’s so big. I’m one of the only Native American people stepping out, not just here in South Dakota but in the U.S., period. It’s very important to us—the education factor, employing Native American people and teaching them workplace skills, social skills, money management, all of that. This is my life’s work now, I put my heart into this.” 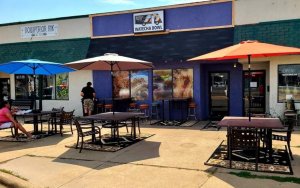 Outside of the restaurant, West is hoping to give back to the business community as well. He just announced that he’ll be hosting a small business expo in September, with a goal to feature 100 local small businesses.

“We’ll put them all under one roof, we’ll have food trucks there, and essentially we’ll be introducing people to the hidden gems. This is for every small business in South Dakota from Spearfish to Sioux Falls, retail, farmers, food, hairdressers, it doesn’t matter.”

“Every business owner in this community works hard. I’ve had to jump through hoops to get where I am, so I know what other small business owners who don’t have the resources I have now are going through.” he said.

The first annual Small Business Expo will be held on September 25 at 11 a.m. at 3601 S Minnesota Avenue in Sioux Falls.

Watecha Bowl is located at 2305 W Madison Street and is open seven days a week from noon to 8 p.m.