Midco is a sponsor of Startup Sioux Falls.

Back in July, Midco announced its Fiber Forward initiative—a $500 million investment to bring 10G internet speeds to homes and businesses across its service region through fiber-optic technology. Fiber is a type of broadband connection that offers increased reliability and speed, as well as lower latency.

The Fiber Forward announcement signifies Midco’s heightened commitment to delivering these benefits to all customers. The initial goal of bringing 10G speeds to the region—without a focus on fiber—was announced in 2019, with an estimated completion date of 2030. However, after conducting research and testing, Midco determined that utilizing next-gen fiber technology to deliver 10G was the best way forward. In making that shift, the company also decided to advance its completion date.

“That initial announcement was in 2019, and since we’ve decided to commit to fiber we pushed it up to 2025. It’s our commitment saying, ‘Okay, we’re on this path, let’s crank it up,’” said Jon Pederson, Midco’s chief technology innovation officer.

This shift means that all new construction will be built with fiber to the premise—as short of a distance to a home or business as possible. For existing customers, fiber will be implemented at either the curb or the premise, depending on feasibility. Currently, most customers are operating on cable modem technology. 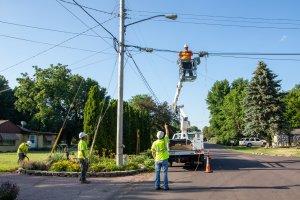 However, the switch to fiber isn’t exactly abrupt. In recent years, Midco has implemented some fiber into those existing cable modem connections to increase broadband capacity. With the Fiber Forward initiative, those connections will transition to a point where they are primarily fiber instead of cable.

“As we’ve had to modify our networks to handle all this massive increase in the last 10 years, we’ve increased broadband capacity more than 7,000 percent. In the background, what we’ve been doing is adding fiber to make that happen,” Pederson said.

When it comes to who’s going to receive fiber first, the answer is split between new construction and upgrades for existing customers. New construction can occur anywhere, from small towns and rural areas to urban centers. Upgrades, however, will prioritize larger communities like Sioux Falls and Fargo. As such, it’s possible that an individual or business in rural South Dakota could end up with fiber implementation before a Sioux Falls customer, solely because they were new construction. 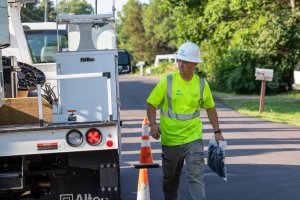 Regardless of location, Midco customers will not see a billing increase or any additional fees associated with fiber and 10G.

According to Pederson, Midco’s shift to fiber is a practical and necessary one.

“I think we all found out during the pandemic that you really need a connection where you can have a nice two-way conversation without a glitch,” he said.

“Behind the scenes, there have been a lot of advancements in optical technology, and it just got to the tipping point where if you’re going to do a new build, it’s more cost effective. We know that, but others know it too, so if you sit on your hands and you don’t do anything, somebody else with fiber is going to come in. So it’s a competitive reason, but it’s also a technology and economic advancement reason.”

At Startup Sioux Falls, we know that access to quality internet service is critical to a startup’s or an entrepreneur’s success. One of the many benefits we offer our coworking members and tenants is our high-speed internet, which is provided through Midco’s generous sponsorship.

“It’s one of those things that you just don’t want to worry about if you’re an entrepreneur or startup. You just want the internet to work so you can do what you want to do. And our goal is to make sure that it’s the best it can be in the United States,” Pederson said.

According to Midco’s director of corporate communications, Paige Pearson Meyer, the company’s connection to entrepreneurship is longstanding.

“Midco has entrepreneurship in its DNA. Founded in 1931, the company started in the movie theater business. Throughout its 90 years, it has made many pivots to meet customers’ needs,” she said.

“Our story aligns with Startup Sioux Falls’ mission to spur business innovation. As the leading provider of reliable, high-speed internet, Midco services are depended on by entrepreneurs to help their businesses launch and grow. We take that responsibility very seriously, knowing that our network links area entrepreneurs to the world.”

Startup Sioux Falls is grateful to Midco for its continued partnership and support. Learn more about Fiber Forward at midco.com/fiber-forward.