After a soft opening on Monday, February 3, The Kitchen will celebrate its grand opening next week with a variety of events and a week-long open house. Jen Kolb came up with the concept of a co-working space for women nearly a year ago, and she’s been working hard to bring it to life ever since. After an extensive search for the right location, Kolb signed a lease on the space at 4301 S Racket Drive in December.

It’s been a little over a month, and the former boutique space has been transformed into a light, airy environment with a mid-century modern design.

“The name, ‘The Kitchen,’ has always given me this retro vibe, so I went with the mid-century modern feel, but I also wanted it to be clean, minimalist, and inspiring,” said Kolb.

Kolb also made an effort to include elements from local creatives and artists, including murals by Ajla Sundstrom of Palm & Poplar and Jillian Gunlicks of Jillian Artistry, as well as pieces by Sarah Langenfeld and Emily Kinsella.

The space, which Kolb says has a capacity of about 75 people, features two conference rooms, a private room for phone calls or nursing mothers, and an open workspace with a variety of tables and comfortable seating. 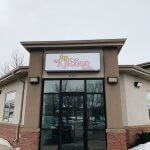 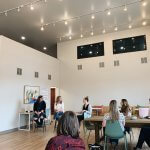 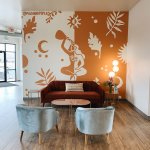 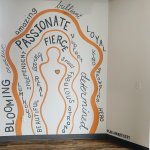 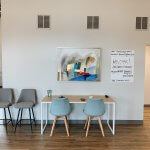 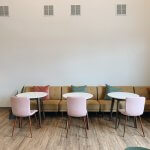 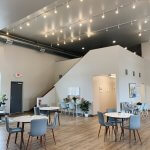 Check out The Kitchen during next week’s open house

The Kitchen will be open to the public next week, February 10-14, from 8 a.m. to 5 p.m. Women will have the chance to come in and utilize the space at no cost to see if a membership might be the right fit for them.

Both premier and part-time members will enjoy The Kitchen’s many amenities, including wifi, coffee, access to meal delivery services, discounted childcare, and unlimited access to events.

Kolb plans to host 2 to 3 events each week, ranging from educational seminars on financial education to panel discussions featuring female business owners. But events won’t focus strictly on business, she says. For instance, on Saturday, February 15, The Kitchen will host a yoga and sushi-making class titled, “This is How We Roll,” featuring Tray Mendez of Element Yoga and Emily Wilson of Bee Loved Kitchen.

During its soft open, The Kitchen kicked events off with a Canva design workshop on Tuesday, February 4 and a speaker panel featuring Jen Jones and Melissa Heckel on Thursday, February 6. Another panel discussion will be held on Friday, February 7, featuring Maddie Peschong, Amanda Runia, and Tracy Gran.

From the space and its amenities to the variety of events and workshops hosted by The Kitchen, Kolb says she aims to make it a welcoming space for all women.

“I really want to have something for everyone, whether that’s an entrepreneur, an employee of a business looking to network, or a stay-at-home mom looking for community,” said Kolb.

Check out The Kitchen’s events page on Facebook to stay up-to-date on the offerings during the following weeks.

Would you like the latest startup community news and event info delivered your inbox each week? Register for our weekly newsletter using the form below.