On Saturday, March 14, Hack Sioux Falls will kick off its fifth project at the Zeal Center for Entrepreneurship.

Hack Sioux Falls is a collaborative educational project designed to teach kids ages 9 to 18 about electronics, embedded technology, and electrical engineering. The program is run by Will Bushee, Executive Director of Code Bootcamp School, and it’s a six-week event that occurs twice a year. 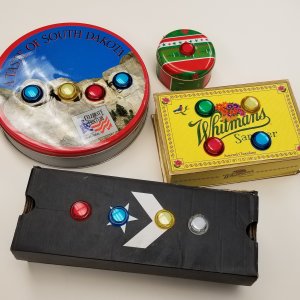 Each project features a specific challenge that kids are able to put their own spin on by building a creative solution. Past projects have included creating something with LED light strips, designing a tamper-proof Christmas present, or reinventing the classic game, Simon Says.

“My original idea was that no one is teaching kids about electronics, but it’s really never been easier,” Bushee said. “I wanted to challenge them to build things they would never have known they could.”

In early February, Bushee announced the Spring 2020 challenge—building a Bluetooth-controlled car, complete with wheels, motors, lasers, and sirens. Check out the video below to learn more about the challenge.

How is Hack Sioux Falls structured?

Well, it’s not that structured at all, and according to Bushee, that’s the beauty of it.

“It’s great to see them have these looks on their faces like, ‘What? Nothing’s off limits?’ That’s a lot of creative freedom,” he said. 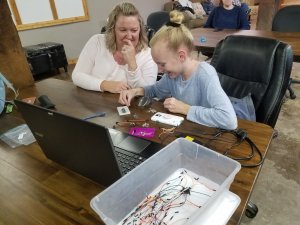 Beginning on March 14, there will be sessions for kids to attend every Saturday. The first few sessions will function as workshops, where the kids will learn the basics of electronics, programming, and soldering. They will have time to explore the components available to them, and begin strategizing what they would like to build.

From then on, the sessions will simply be work time, with Bushee and parent volunteers providing supervision and acting as sounding boards for the kids’ ideas and questions. While there is a schedule on the website, Bushee says timing is flexible and parents don’t have to worry if their kids aren’t available for a particular session.

At the end of the six weeks, kids are given the option to shoot a video of their project, showing what they built and what made them proud. According to Bushee, many kids say they’re most proud to have simply completed the project.

“It all comes together, and they have this cool thing that they may not have even conceived of when they walked in the door,” he said.

Jen Jones is a parent volunteer and the owner of Stacked, Inc, and her son has attended Hack Sioux Falls multiple times.

“It’s a great opportunity for like minded kids with similar interests to get together and explore the kinds of things that might intimidate them in a competitive environment,” she said. “We need to teach kids technology because most people are too intimidated by it.” 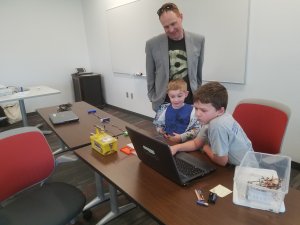 Jones says Hack Sioux Falls makes technology accessible, approachable, and puts it in a non-threatening environment where kids get to use their creative side to build a solution.

“They have to walk through the steps to get there, and kids need those skills, especially if they’re interested in engineering or technology,” she said. “Something that sounds as simple as soldering takes practice, fine motor skills, and coordination, but the idea is really simple. It’s a great opportunity for kids of every gender to try out something they haven’t done before.”

Bushee adds that the freedom in Hack Sioux Falls’ structure allows kids to make what they want of the opportunity.

“I’m happy for them to make it as elaborate or simple as they want,” he said. “Just show up with an open mind and a desire to be able to build something cool and interesting.”

There’s still time to buy tickets for Hack Sioux Falls. The cost to participate is $179.00 per kid, which includes all necessary materials. Additionally, kids are able to bring everything home at the end of the project. View the schedule and sign up online.