The first cohort of the CO.STARTERS accelerator program in the Mitchell area graduated on July 19.

This opportunity was made possible by Accelerate Mitchell, a partnership between the Mitchell Area Chamber of Commerce and Development Corporation, Mitchell Technical College (MTC), Dakota Wesleyan University (DWU) and Mitchell Main Street & Beyond, alongside Startup Sioux Falls and Dakota Resources.

In May 2021, Startup Sioux Falls announced an expanded version of its CO.STARTERS accelerator program with the goal of reaching underserved communities statewide. This effort was made possible thanks to a $1 million grant from the U.S. Small Business Administration, through the Community Navigator Pilot Program.

“We couldn’t have a better partner than Dakota Resources to help deliver the CO.STARTERS program throughout South Dakota, reaching communities like Mitchell that have traditionally been underserved,” said Jeff Hayward, Startup Sioux Falls’ program manager. 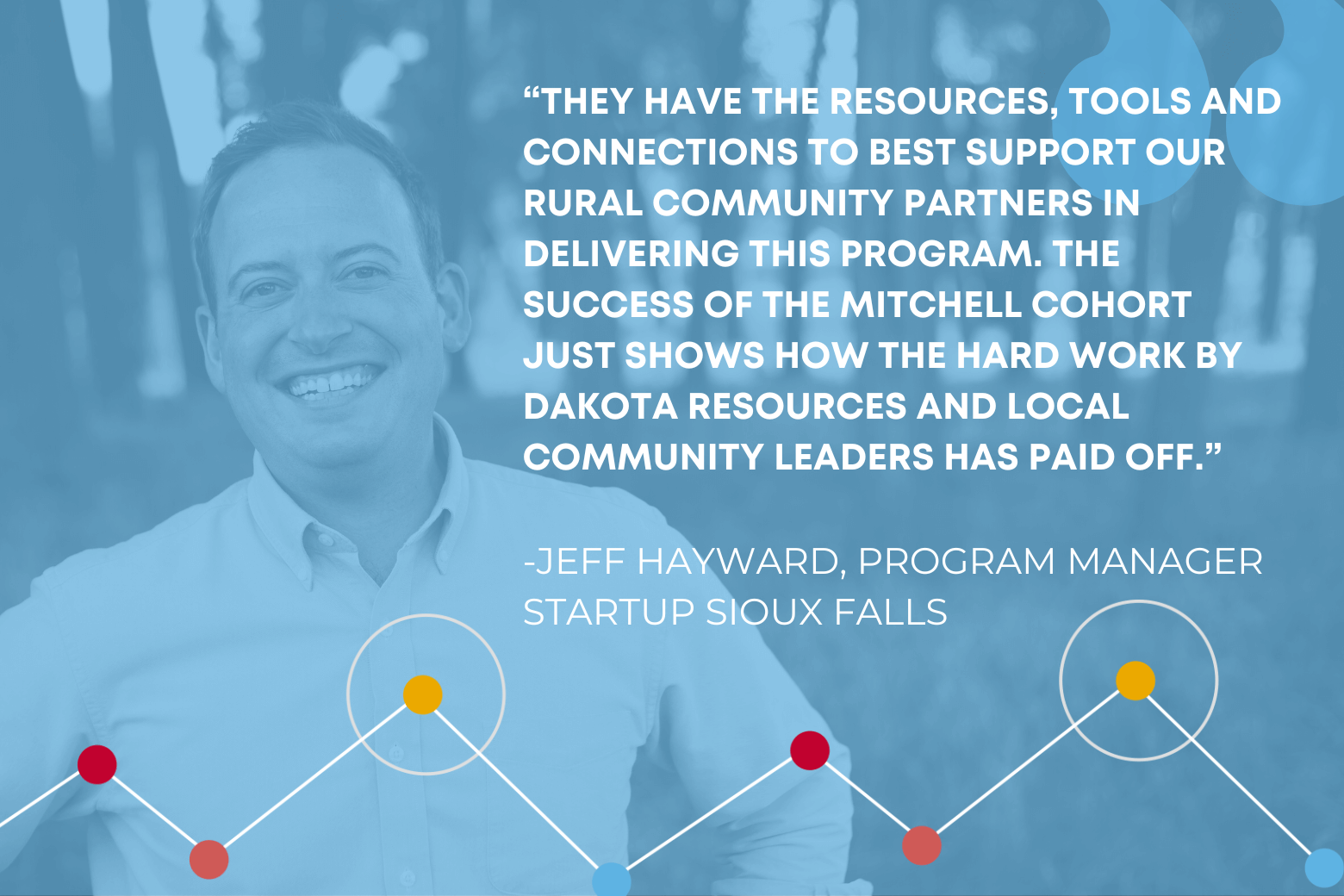 “They have the resources, tools and connections to best support our rural community partners in delivering this program. The success of the Mitchell cohort just shows how the hard work by Dakota Resources and local community leaders has paid off.”

The 11 participants who completed the 10-week CO.STARTERS Core program in Mitchell represented a variety of entrepreneurial ventures.

The program was facilitated by Dr. Ryan Van Zee of Mitchell Technical College and Laura Klock, owner of Farm Life Creamery in Ethan, SD. Sessions were held weekly between Mitchell’s higher education institutes, MTC and DWU. Similar to the programs held here in Sioux Falls, participants in the Mitchell cohort benefited from a variety of guest speakers—many of whom were local business people and entrepreneurs from the Mitchell area.

“We jumped on this opportunity because we saw such a need for support for entrepreneurs in the Mitchell area,” said Alex Heidinger, chamber program coordinator for the Mitchell Area Chamber of Commerce.

“We jumped on this opportunity because we saw such a need for support for entrepreneurs in the Mitchell area,” said Alex Heidinger, chamber program coordinator for the Mitchell Area Chamber of Commerce.

“The local business owners who came into our sessions were amazing. They were great at answering questions and offering themselves up as a resource to anyone who might need help in the future. We had really great participation and are excited to gain traction for the next cohort in the spring.”

Upon graduating, each participant of the Mitchell cohort received a one-year membership to the Mitchell Area Chamber of Commerce and the opportunity to participate in an upcoming local resource fair this fall.

Accelerate Mitchell plans to hold another cohort in Spring 2023, in partnership with Startup Sioux Falls and Dakota Resources. For more information on Accelerate Mitchell, visit www.mitchellchamber.com/accelerate-mitchell.

Test your idea with CO.STARTERS!

Whether you’d like to participate locally in Sioux Falls or through one of our resource organizations, we encourage anyone who’s interested to fill out the following form: