After the success of the first virtual Startup Social, Zeal’s new community manager, Peter Hauck, posed the idea for a New & Aspiring Entrepreneurs Meetup—an event focused on the dreamers, fresh businesses, and ‘wantrepreneurs,’ as Hauck put it.

The event, which took place via Zoom on Tuesday afternoon, attracted over 30 participants to listen to two speakers and engage in a follow-up discussion about opening or operating a new business during a pandemic. 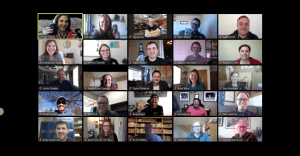 The first speaker was Travis Nye, owner of Spellbound Magic Shop & Theater, which opened up its physical location at 5413 W 41st Street on March 25. Nye remained committed to opening a brick and mortar location, even in times of economic uncertainty for retail stores.

For the time being, he has made adjustments to his offerings, such as posting videos of magic tricks and new product demonstrations on Facebook and even doing birthday parties over Zoom, which he says is a bit challenging.

“You don’t get to feed off of the audience’s energy in the same way, but I made it work,” Nye said.

Nye will also be hosting an online Magic Camp, a virtual version of a class he’s been offering for three years. The cost of the class is $10, and it’s aimed for ages 8 years and older. Upon signing up, a list of supplies will be provided, most of which you probably already have in your home.

Walter Portz, founder of Helen’s Plan, was the second speaker, and he talked attendees through the process of developing his business idea, bringing it to fruition, and preparing to launch in the midst of a pandemic.

Portz, whose product centers around preparing for end of life, feared that launching during COVID-19 may seem insensitive. Ultimately though, he says there’s no real time like the present.

“We’re all here, and we’re all thinking about our mortality,” he said.

Portz hopes his product will make a positive impact on people’s lives by easing the stress of managing loved ones’ affairs after they pass away.

“Some things work now, and other’s just don’t,” he said. “When this all clears up, a lot of old ideas will be gone, and we just have to reemerge with new vigor and new life. It’s like the rebirth that comes after a forest fire.”

After the speakers’ ten-minute presentations, the audience had the opportunity to ask questions.

“It was an awesome opportunity to hear how businesses are managing the strange economic times we are in currently,” said Hauck. “Right now, people are laser-focused on the struggles that our community is facing, and this event was a way of shining a light on a few entrepreneurs who have found ways to make their businesses work despite the Covid-19 curveball.”

As social distancing continues, the team at Zeal and Startup Sioux Falls is actively planning different virtual opportunities to keep the startup community engaged and supporting one another.

Look for details to be announced on Monday about the next Zeal/Startup Sioux Falls event, Virtual Event Planning Discussion.